UPDATE: [January 28th 2018] The Zhiyun Smooth-Q has now been reduced to $99! there’s never been a better time to buy this great smartphone gimbal!

As cameras that have been a part of all smartphones for the last few years get better and better, more videographers are starting to film movies using their cell phone. The Zhiyun Smooth-Q Smartphone Gimbal wants to be an indispensible part of the filmmakers toolkit. In this Zhiyun Smooth-Q Review, we take the gimbal for a test drive.

Using a iphone to create good quality video footage is not without it’s problems. Although the camera optics are getting better and better, a user still holds the phone in their hand to film. Consequently, getting a steady shot is not very easy.

The Zhiyun Smooth-Q smartphone stabilizer, is a solution to that problem. By mounting the phone in a 3-axis handheld gimbal, vibrations from the hand of the user almost disappear.

Zhiyun first appeared on the scene in 2015 releasing the Smooth, their original smartphone stabilizer, in May that year.

In the two years since that first launch they have released a series of GoPro gimbals, Mirrorless camera gimbals, and smartphone stabilizers, that have always been well recieved in the market.

The Zhiyun Smooth-Q was released in March 2017 and is positioned as the budget friendly, consumer friendly model, to sit along side the more pricey Smooth 3. The Smooth-Q retail price at lanch was $139 (

), which is less than half the price of the competitors like the

Firstly, for those of you that like to have matching accessories, the Smooth-Q comes in four colours, classic black, gold, rose gold and space grey, in keeping with the iphone colour range. 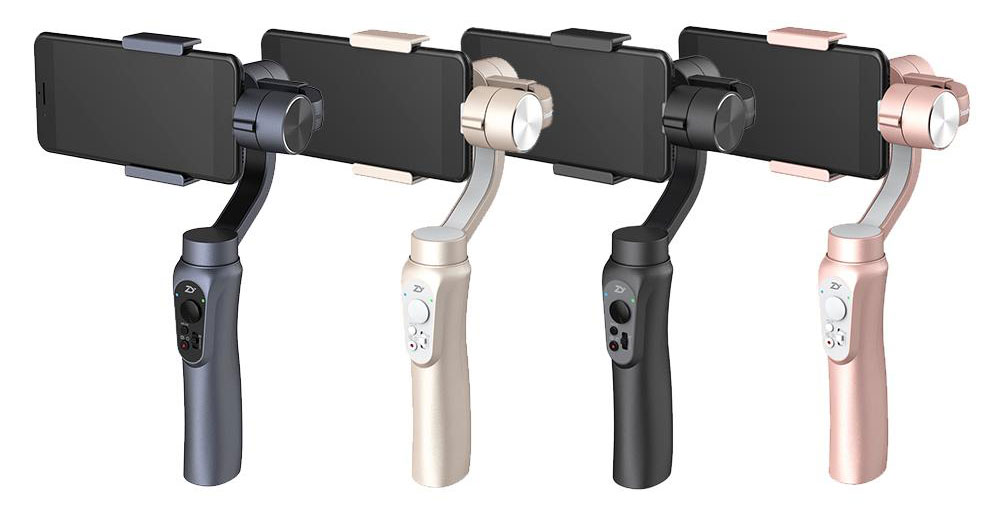 The second thing to notice, is that the iphone gimbal comes with a zip-up hardshell case, that perfectly fits the gimbal, and protects it when you want to throw it in your backpack. This is a great added extra. Gimbals are difficult to transport because of their shape, so it’s excellent to know the Zhiyun have you covered here. 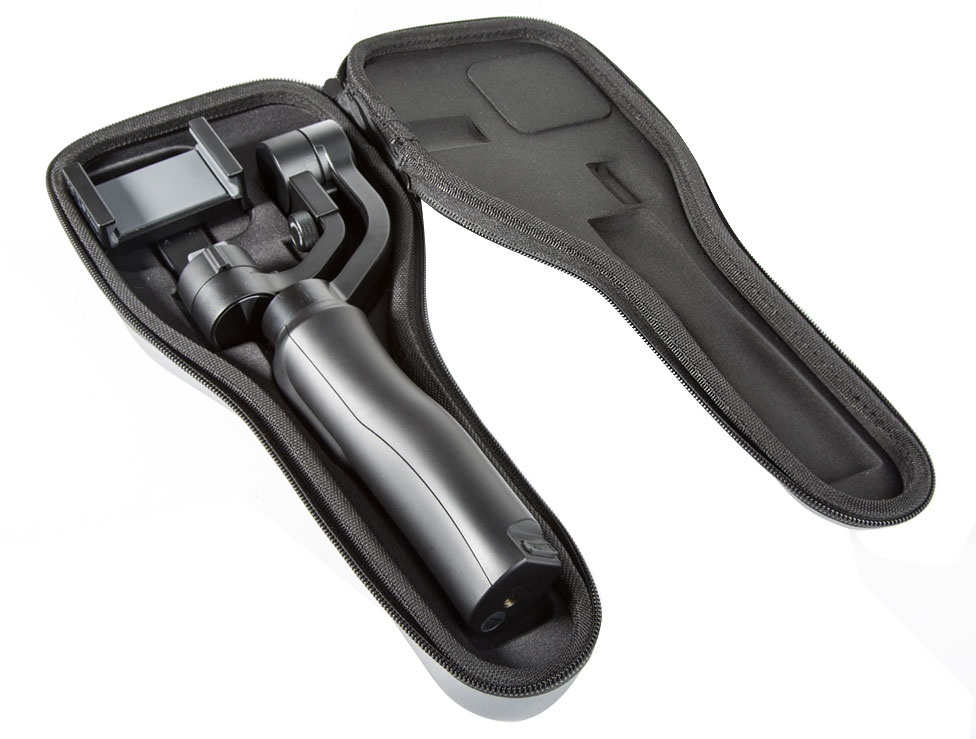 Hardshell zip-up case is useful for transporting the gimbal

Not much else is included. You get a Micro USB cable used for charging the gimbal. A carry strap for the case, and the manual, which is in Chinese. Not very helpful for the international market, but I hope they will start shipping English manuals soon too. 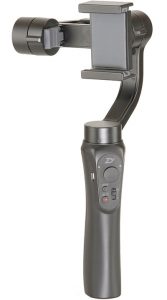 The Zhiyun Smooth-Q is designed to appeal to a mass market. The construction is plastic, and although the gimbal does feel solid, holding the smooth plastic handle isn’t as reassuring as holding a textured grip, similar to the grip found on the DJI Osmo M.

Although marketed as a smartphone stabilizer, it does say on the Zhiyun tech website that it can also be used as a GoPro Gimbal. Although, theoretically, you can mount a GoPro in the gibmal,  from what I’ve seen elsewhere, this only really works with an extra GoPro accessory adapter that doesn’t come in the box. So I won’t be trying that out today.

The spring loaded clamp that holds your iphone is quite powerful, there doesn’t seem to be much chance that a smartphone would fall out. However, this also makes it quite tricky to mount the phone in the gimbal with one hand. I hand to put the gimbal down, and insert the phone using both hands. Less than convienent if you are try to catch some action quicky.

On the positive side the gimbal clamp can be positioned in a landscape or portait mode. Simply loosen the fixing thumb screw, and turn the mobile clamp by 90° to make a quick vertical/horizontal switch. This avoids having to remove the phone from the clamp to make adjustments.

Balancing a 3-axis gimbal is usually a fairly slow process. Especially if the gimbal is designed for heavier cameras. Zhyiun have come up with a simple solution that makes it easy and quick. Using another thumb screw, the arm length of the gimbal can be adjusted, consequently the gimbal can hold a range of sizes of mobile phone, handling large devices like the iphone 7+ easily.

Here is a video from Zhiyun, with instructions on setting up the smartphone gimbal. You can see how quick it is.

On the bottom of the handle, as on all Zhiyun gimbals and stabilizers, there is a standard 1/4 inch tripod mount. Having a tripod mount on a smartphone stabilizer doesn’t seem to make much sense, but in combination with the smartphone app, this enables extra functionality like timelapse video, long exposure, and automatic panning shots.

The Zhiyun Smooth-Q comes with a massive 26650mAh battery.

Zhyiun say this is enough to power the gimbal for 12 hours, in our tests it was a little bit less than that. On the positive side this beats its closest competition by some margin. For example the DJI Osmo Mobile has a battery that only lasts 4 hours (980mAh).

Unfortunately the battery is built in. Although this shouldn’t matter on a day to day basis, if you use and recharge the gimbal regularly, the battery will eventually reach the end of it’s life and the gimbal will be useless.

The charging port for the gimbal is in the middle of the handle, and can be charged using the standard micro USB cable included in the box.

On the bottom of the handle, there is a standard USB port that Zhiyun intend to be used to charge your smartphone. It’s a great idea, a similar thing can be found on the EVO GP-Pro Gimbal. In reality though, it doesn’t work. Most smartphones have the charging port on the bottom of the phone, which is completely covered when the phone is in the gimbal. As a result, the gimbal can only be used to charge your phone it’s not in use. 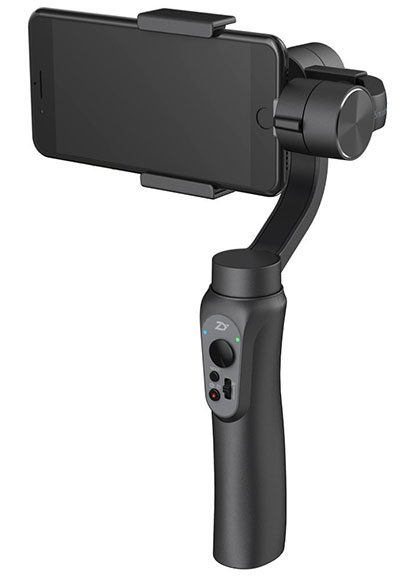 The gimbal controls are nicely positioned on the handle. As is becoming standard on handheld gimbals, there is a thumbstick that allows you to pan, tilt and rotate the gimbal. In a nice touch, the thumbstick is pressure sensitive, so it moves the gimbal faster if you press harder.

The mode button changes the shooting mode between “Full”, “Follow” and “Lock”. It locks the gimbal to only move in certains axes. This is great for keeping someone in shot, if you are walking next to them for example.

Additionally to the standard controls, there are some controls that only work when the smartphone is running the ZY Play app on iOS or the Zhiyun Assistant app on Android.

Once you have the app installed on your phone, it is easy to connect to the gimbal. Just switch bluetooth on, open the app and hit the connect button. The app should now be connected.

The first screen of the app shows you lots of information about the current state of the gimbal. It offers access to the settings, calibration, camera mode. 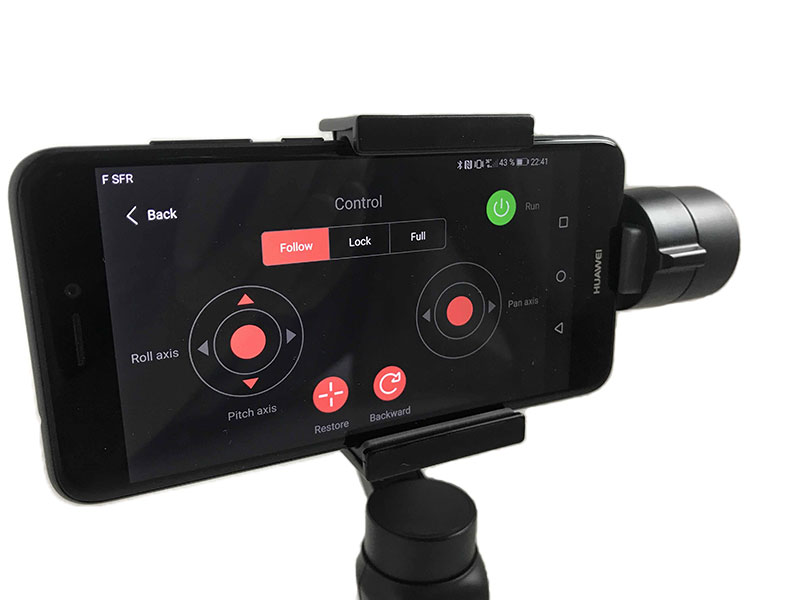 The Camera mode presents an interface to control the gimbal. It shows what shooting mode the gimbal is set in. It’s quite clear, and self explanatory, but not that useful, because if you touch the screen while the camera is in the gimbal it will shake the camera. I suppose it might work well if you are using it to control a gimbal with a different mounted camera.

Another feature of the app is face tracking. For me, this didn’t work very well. I prefer to have control over where I’m pointing the camera, and I probably wouldn’t use this feature. However, I can imagine it might be useful if you are trying to shoot a moving object (or person) while looking where you are walking. It would allow you to take your eye off the screen, and focus on not walking in to any obstacles.

Filming with the Zhiyun Smooth-Q was a good experience. The gimbal auto calibrated when I switched it on, and was ready to shoot straight away.

The 3-axis gimbal did a great job of stabilising the video footage, on a range of smartphones I tried it with. I didn’t test it with a GoPro, but I can imagine it will work just as well.

There was a very small amount of movement in the footage. This can be handled by the camera if you have a phone with Optical Image Stabilization.

I wasn’t able to detect noise from the gimbal motors in the footage I filmed, which is great. As this is a cheap gimbal, I was really expecting there to be some compromise on the gimbal brushless motors. 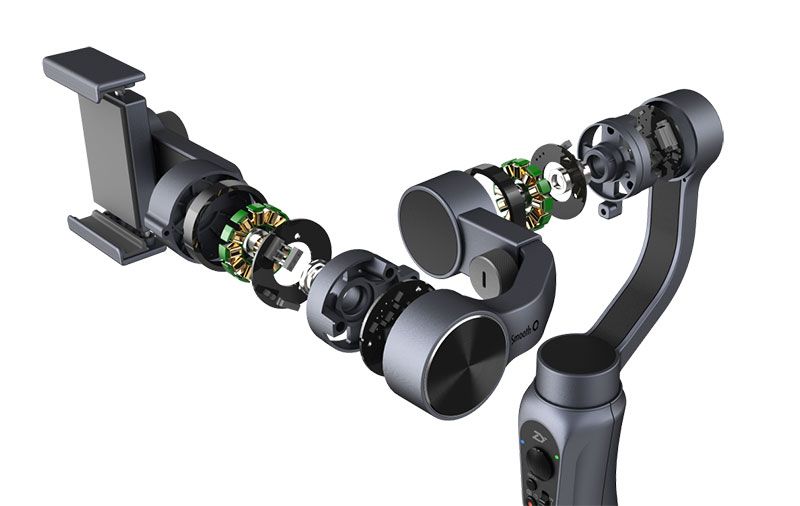 When using the thumbstick, it felt a little slow to respond, but no more than other gimbals we have tested. I would generally not recommend using the thumbstick to control the gimbal anyway. It makes for much more natural footage if the camera is positioned by hand.

All in all a mixed review for the Zhiyun Smooth-Q gimbal. There are plenty of features I like: The ease of switching the orientation of the smartphone; and the balance set up; The huge 12 hour battery; The handle controls work well, to name a few. Timelapse and panning mode with the app is a nice bonus.

But there ware also some issues. The build quality is not the best, being made of plastic feels a little more fragile. The built-in battery is frustrating, and could easily be made replacable. The app is definitely a little floored and trying to use the app whilst filming is pretty hard. 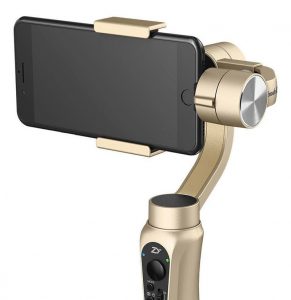 The point that sets this gimbal apart from the competition is the price. At

, it really is the cheapest 3-axis smartphone gimbal on the market. It’s closest competitor, the

DJI Osmo Mobile is over twice the price, but with a considerably higher build quality.

In summary, if you are on a budget, or just starting out making movies with your smartphone, especially vloggers or people who want to capture some quick but professional looking shots, the Smooth Q seems to be a good and affordable choice when it comes to mobile filmmaking. However, if you can afford it, or will be using the gimbal frequently, then spending the money on a higher quality 3-axis smartphone gimbal like the

Current Price on Amazon US: