The FeiyuTech G360 is yet another gimbal from the reliable Chinese company, FeiyuTech. The G360 sets itself from the crowd by being more than just another GoPro gimbal. With the G360, FeiyuTech set out to create a gimbal that could adjust to anything from a digital camera, to a GoPro, to a phone. This gimbal seems exhaustively engineered and the result is a unique product in the market of action-cam stabilizers.

The FeiyuTech G360 uses a 22560 Li-Ion battery which offers up to 6 hours runtime on a single charge. This is a great figure in the gimbal category, and FeiyuTech knows it.

A quarter inch screw hole on the bottom of the handle allows you to mount the G360 to any standard camera tripod.

While the gimbal features buttons for mode switching, power, and panorama features, Feiyu-Tech has also designed an accompanying smartphone app which allows you to control the G360 wirelessly. No modern gimbal can compete without brushless motors for smooth and quiet movement, and the G360 has those too.

Because of its unique 360 panorama capabilities, the Feiyu-Tech adopts a counterweight system that places a hanging weight to the side of the handle. This allows the camera to pan all the way around but does mean you have to be careful that your arm doesn’t bump the weights.

It seems like this camera was designed to be mounted on a tripod though, and that’s where Feiyu-Tech’s new remote app shines. Controlling the tilt, pan, and other features are simple via the smartphone app (available for both android and iPhone). This app allows you to enjoy being fully in the frame while shooting scenes with your friends, rather than taking awkward selfies with over the shoulder views of the party behind you. 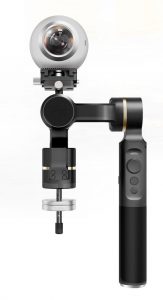 Universal adaptability means you don’t have to go buy the latest GoPro to get the benefits of a gimbal. Controlling your camera via a smartphone app is convenient, though if you have your phone mounted on the gimbal, you’ll need a second phone to control it which seems…impractical.

It’s also worth noting that while in handheld mode, the G360 has a joystick attached to the handle which allows you to manipulate the tilt and pan of your camera. The 6-hour battery life is amazing and ensures your camera will run out before your gimbal does.

Perhaps due to the unique “twin-body” counterweight style, the G360 doesn’t seem to stabilize the image as quickly as some other 3-Axis GoPro gimbals on the market, like the REMOVU S1 or the GoPro Karma Grip.

While you are free to mount whatever camera you want on top of the G360, if it weighs more than the counterweights beneath it, the gimbal is likely to lose control. Having to consider the position of the hanging counterweights isn’t ideal when trying to capture the action without your arm hitting the thing.

Setting the balance on the FeiyuTech G360

The $350 MSRP might seem hefty at first, but when you consider the array of uses, your heart might slow down a bit.

If your use-case falls in line with the FeiyuTech G360’s strong points, there shouldn’t be a problem. That means if you’re looking to get panoramic shots of family parties, BBQs, or sporting events, you’ll be fine.

If you want to film while you take part in the sporting events, you might want to look at a more manageable and stable option.

Find the best GoPro Gimbal of 2017 in our round up.