Feiyu Tech is a company that specializes in making mounts for GoPros, phones, and cameras. After 10 years of releasing quality products, Feiyu Tech has a good reputation in the prosumer category. The Feiyu Tech G4 3-Axis GoPro Gimbal is a stabilizing accessory for GoPro cameras. A gimbal separates itself from other stabilization mounts like shock mounts and stabilizing grips, by rotating along an axis. You’ve probably watched a movie scene where the camera sweeps down from the sky, focusing on a point while maintaining an impossibly smooth transition. If you wondered how they did it, the answer is they used a gimbal. 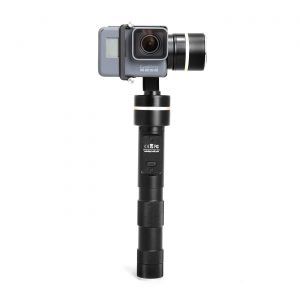 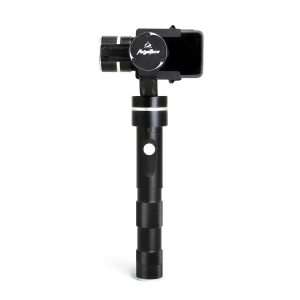 Starting with the handle, the G4 Gimbal has a single LED button embedded within thumbs reach. The LED light in the handle will flash when pressed, indicating which mode the gimbal is in. The G4 is rated for 4 hours of use while using the included rechargeable batteries, and comes packaged with four total batteries — two for backup. A battery level indicator lets you know when you should prepare to pop in the spares. When you get home you can plug the G4 directly into a charger using an included mini-USB cable. Also included are two different sets of screws, one for holding the naked camera, and another for fastening the GoPro with accessories added on. The bottom of the handle is threaded, allowing you to add an extension for getting nice aerial shots.

Yes, the G4 looks like a glorified selfie stick. Yes one of the modes, accessible by a button press, flips the camera around to make selfies extra easy. Don’t limit yourself by thinking of this device as a gimmick.

The G4 isn’t for taking group photos of the family at get-togethers, but when you’re cruising down the sidewalk and you want to capture the scenery, it does the trick. If you do want to attach the threaded handle to a tripod for family photos, an optional remote control gives you control over the four operating modes.

If your GoPro starts running low on battery, you can plug the GoPro into the Feiyu G4 to get a little extra charge for the GoPro. You may not be extending your dying GoPro’s life by much, but the option doesn’t hurt. Up above, we mentioned the four operating modes.

If you’ve already started browsing the Feiyu Tech website, you might have noticed that it only mentions three modes. The additional position may be the result of a software update (who knows), but we can’t complain about added ways to capture a shot.

The brushless motor allows the cameras ultra-smooth vertical movements to be locked in at any angle while retaining the ability to pan horizontally. With lock mode, you can point the camera in a direction and keep it there. If you’re filming a quick interview, you won’t have to worry about accidental hand movements affecting the scene.

Finally, pressing the LED button three times inverts the camera. Inverting the camera allows you to film yourself, or hold the gimbal upside down and film shots low to the ground.

This is the Feiyu Tech promotional video from their youtube channel.

Feiyu Tech’s G4 Gimbal is a great choice for anyone looking to spruce up their video work. A four-hour battery life already outlasts the GoPro, so throwing in two additional batteries goes above and beyond.

The G4’s brushless motor system makes every movement glassy, and it will reflect in your scenes. Jerky movements and quick pans are polished without the need for complicated post-production techniques. After filming with the G4 you’re left with satisfying source material which you can turn into a polished work.

To be frank, there isn’t too much to mention here, but we can scrounge up a few things.

First, the MSRP isn’t cheap; while it premiered at $375, the Feiyu Tech G4 3-Axis GoPro Gimbal is currently sitting around $190. Quick up and down movements seem to confuse the G4 as it tries to compensate for what may be an unexpected upside down shift.

Feiyu is a Chinese company, and it seems like some things didn’t make clearly through the translation process. The camera is intuitive to operate (press a button and it goes), but installing software and drivers can be a bit of a pain.

If you’re in the market for a gimbal, or if you’ve been scratching your head looking for a neat trick to upgrade your YouTube content, this is it. The price of the Feiyu Tech G4 handheld gimbal should be considered a positive investment.

Once you manage to get the drivers installed and updated, you’ll be left with a stabilizer that helps you make the transition from amateur home videos to glossy pro-looking spectacles. It also works great as a selfie stick at family get-togethers.

Not sure what any you should be looking for? Read our Gimbal Buyer’s Guide to get the lowdown. Or check out our round up of best GoPro gimbals on the market.